Monitor only a subset of VGs

Monitor only a subset of VGs

Sometimes, our ToIP team adds new VGs to a CUCM cluster. Since it takes some time to properly setup a new VG, once the VG is plugged in, Prognosis starts firing unwanted alarms (because of ports not yet configured for instance).

Other than manually editing the 30+ VG rules to only include Production-ready VGs, is there a way we can prevent some of the VGs from being monitored by Prognosis?

Unfortunately, since these are customers' VGs, we don't have much liberty regarding their naming and/or description so excluding VGs based on these won't do the trick

could you maybe use a specific attribute in the CUCM as long as these gateways are not propperly setup. You can check the complete CallManagerGateway/CallManagerDevSum Record (depending which condition causes your alarms) for other information you may use but I could imagine that as long as these gateways are not working you configure them into a specific location, Device Pool or so that Porngois can exclude with the condition filter where clause.

Let us know if that helps. 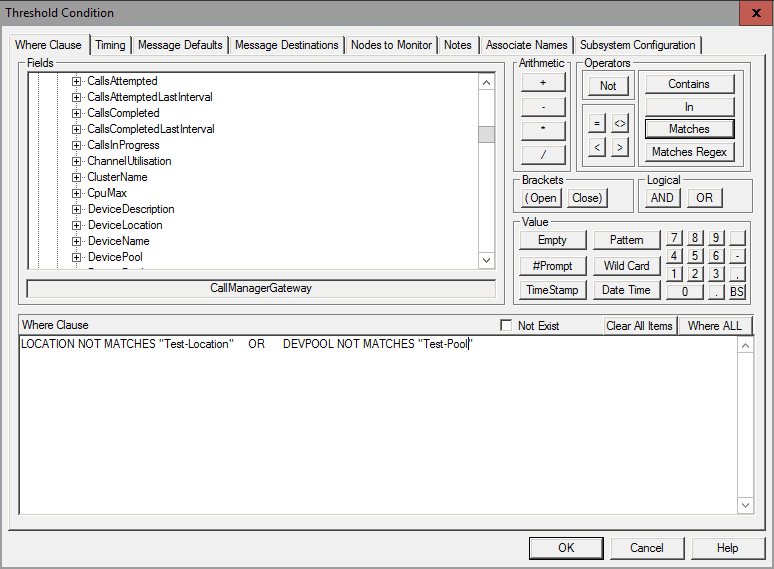 That's a good idea, I'm just wondering if the VG location is available in all the records used for the monitoring,.
If it is then issue solved, if it's not then I think it won't do the trick.

If VGs were nodes, we could easily build a dynamic nodegroup to filter out the Preprod VGs, unfortunately we can't.

Thanks for the suggestion, I'll investigate this!
0 Likes
Reply

Think in this case you have a lot of options, just check the records I named in the documentation and pick the best for you.